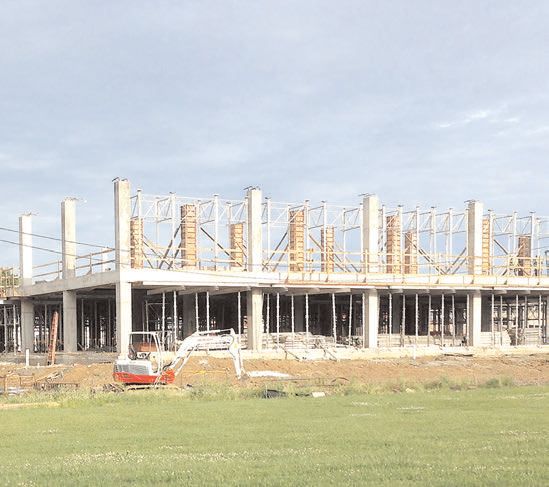 The Port of Morgan City’s Government $11 million Emergency and
Operations Center is shown April 15. It is located on La. 182
adjacent to the Morgan City Municipal Auditorium.
The center is scheduled to be finished by September.

Throughout the past year, lots of activity has been going on at and around the Port of Morgan City with the beginning of construction on the port’s new Government Emergency and Operations Center and import-export ships making routine visits to the port. The Government Emergency and Operations Center project went through geotechnical work, test piles being driven, land being cleared and the concrete slabs being poured for both floors of the building in a year’s time, Port of Morgan City Executive Director Raymond “Mac” Wade said. The center will be located on La. 182 adjacent to the Morgan City Municipal Auditorium. Port officials will move into the building by the end of September, Wade said. Port officials secured $7.1 million in state capital outlay funding with state the help of state Sen. Bret Allain, R-Franklin; state Rep. Sam Jones, D-Franklin; and state Rep. Joe Harrison, R-Gray. The Port of Morgan City also put $3.9 million of its own funds to build the center. The building will be able to withstand a Category 5 Hurricane and has a backup generator, Wade said.

In August 2014, PMI Nutrition International, through its leased vessel, Oslo Bulk 9, began importing 3,000 tons of sea salt each trip and exported grain to the Caribbean. PMI Nutrition International is owned by Land O’ Lakes. Wade expects to have different import-export ships coming into port as well. “The interest is picking up now. It has sparked some interest by a number of shipping companies who see the potential,” Port Economic Development Manager Cindy Cutrera said. “We’re in the import-export business. We’re just trying to match up the right cargos with the right ships,” Wade said. Vessels in the 5,000 to 8,000- ton range are seeing opportunities operating out of the Port of Morgan City, Wade said. Port leaders are working with Moffat & Nichol and LSU economist James Richardson to finish an economic impact study, Cutrera said. The intent of the study is to be able to show Louisiana Economic Development and the Corps of Engineers what the economic potential for the area is if the Bar Channel is dredged and maintained at a 20-foot depth year round, because the port currently isn’t receiving adequate funding, Cutrera said. In other activity at the port, Baker Hughes and Haliburton are utilizing the port’s rail spur. PMI Nutrition International is storing grain in the part of the warehouse. Robins & Morton, the contractor constructing the new Louisiana Energy and Power Authority plant in Morgan City, is leasing 10,000 square-feet of warehouse space at the port since October 2014, Wade said. In December 2014, four 300,000-pound boilers to be used at the LEPA plant arrived at the Port of Morgan City by jumbo railcar. Also in the past year, the port built a new boat shed for its 32- foot port security and surveying vessel built by Metal Shark. Two National Oceanic and Atmospheric Administration Physical Oceanographic Real- Time stations, installed in the Atchafalaya River Bar Channel, were scheduled to be operational by April 15, Wade said. The stations are designed to measure wind speed, current speed, tides, temperature and salinity of the water, Wade said. The public will be able to access the real-time information 24/7, he said. Both stations were paid for by a $550,000 FEMA grant. Port officials had the platforms constructed for the stations while NOAA installed the equipment on the stations, Wade said. One station is located near Eugene Island Lighthouse and the other one is about three miles south of Eugene Island on the east bank of the Atchafalaya River Bar Channel, Wade said. On Sept. 1, 2014, dredging work began in the Bar Channel and reached completion Jan. 2 at a cost of $13.6 million, Wade said. Though the channel is congressionally authorized to be 20 feet deep and 400 feet wide, the port only received enough funding to dredge 18 feet deep and 275 feet wide. Dredging on Crewboat Cut in the Atchafalaya River was completed in July 2014 and officially opened in October 2014 as the new authorized channel for vessel traffic to travel through. It will be self-scouring and replaces the Horseshoe Bend in the Atchafalaya River as the authorized channel. Port Special Projects Coordinator Mike Knobloch said, within the past year, port officials were informed the port received a 2014 port security grant in the amount of $155,000. Port officials are currently implementing the 2011 and 2013 port security grants the port received, Knobloch said. Port security grant funds are used to fill gaps officials have identified in the port’s security, Knobloch said. Cutrera is continuing her efforts to get waterway users and facility operators to report the amount of tonnage they bring through the port to the U.S. Army Corps of Engineers Waterborne Commerce Division, she said. Ports are ranked nationally according to tonnage passing through each port, and they receive funding for waterway maintenance, mainly dredging, in accordance with those rankings. During the past year, the port implemented its Touch Assisted Command and Control System from its 2010 port security grant. The Port of Morgan City is acting as the sponsor and giving systems to the St. Mary Parish Sheriff’s Office, area police departments, 911 communications, levee district, U.S. Coast Guard and St. Mary Levee District. This system allows the different agencies to work together and be aware of what’s going on when responding to a certain event, Knobloch said. TACCS enhances communication between law enforcement and security agencies. Over the next two to three years, port officials want to build on the system and add more camera surveillance, Knobloch said. In January, the industrial road in Morgan City, which goes through port property, officially opened. “It has helped take tremendous truck traffic out of the neighborhood and put it on the truck route where it needs to go,” Wade said. The port donated property for the construction of the road, Wade said. The Port of Morgan City will host its third annual hurricane preparedness forum on May 5 with NOAA and U.S. Rep. Charles Boustany at the Morgan City Municipal Auditorium. The Port of Morgan City recently unveiled a new website, which went live around the end of March.