Clearing the way for shipping 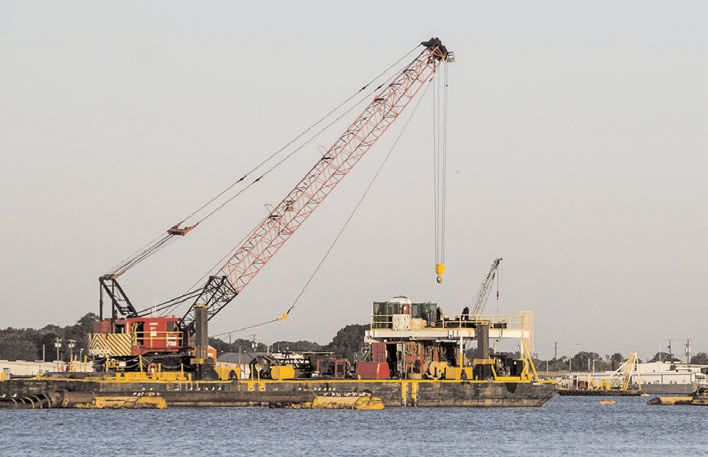 Manson Construction Co. began dredging Berwick Bay Sept. 19 and will finish the project in
about a month.  The contract dredged about a 3-mile stretch from 20 Grand Point and
Tidewater Point to Stouts Pass. Dredging should start in the Atchafalaya River Bar Channel
Oct. 29 and could last up to 100 days.

Dredging work is ongoing in Berwick Bay and set to begin in the Atchafalaya River Bar Channel by the end of October in an effort to keep the area’s waterways deep enough for vessels to navigate. Workers began routine maintenance dredging of Berwick Bay in the Atchafalaya River Sept. 19 as part of a U.S. Army Corps of Engineers contract and will probably finish in about another month, Port of Morgan City Executive Director Raymond “Mac” Wade said. The work cost roughly $2.5 million to dredge a 3-mile stretch, which entailed going from Tidewater Point and 20 Grand Point, under the U.S. 90 and La. 182 bridges, and north to Stouts Pass, Wade said. Berwick Bay is being dredged to about 12 feet deep along the edges of the Morgan City side of the bay. However, the middle of the bay doesn’t need to be dredged and is 45 feet to 60 feet deep. The Berwick side of the bay also doesn’t have any depth issues, Wade said. There haven’t been any vessel traffic issues reported due to the dredge being in use, said Coast Guard Capt. David McClellan, commanding officer of Marine Safety Unit Morgan City.

A different dredge is set to start dredging the Atchafalaya River Bar Channel Oct. 29 at a cost of $5 million. The channel starts 20 miles south of the Port of Morgan City dock and extends south about 22 miles. The Bar Channel dredging should take about 25 days. But if the corps decides to exercise an option for $8 million in additional dredging, the dredge will stay in the Bar Channel another 60 to 75 days. Wade planned to meet with corps officials today to ask them to not exercise the $8 million option and instead use that money for port officials to bring in a different dredge that could keep the channel dredged to its congressionally authorized 20-foot depth year round. Assuming the corps does dredge the entire channel, by January, the channel will be 20 feet deep all the way through, Wade said. By April, though, sediment will start to fill in the channel again. We want to do something different because we know what we’ve been doing gives us about a 90-day channel. That’s not what we want. We need a 365-day channel,” Wade said. Port officials are working to demonstrate the type of dredge port leaders may want to use “to make sure what we want to do is going to work,” Wade said. “We know what they’re (the corps) doing doesn’t work, but what we want to do may not work, either,” Wade said. Port leaders are exploring using different types of dredges that would be much less expensive to operate than the current Bar Channel dredging method. The cutter-head dredge the corps currently uses to dredge the Bar Channel costs about $100,000 per day to operate, Wade said. Port officials think they can get a dredge in use that would cost around $25,000 per day and operate it year-round. The Bar Channel has about a 14-foot to 14.5-foot depth right now. Though the oilfield is in a downturn, even if some of the shipyards in the area had the opportunity to do a project, “they can’t do it because we don’t have the water depth,” Wade said. “We can’t get ships in here, and we have ships that are wanting to come in. We’re turning down business,” Wade said, speaking of the vessels that had been exporting rice to Haiti from the Port of Morgan City. These ships need at least a 16- foot to 17-foot depth to navigate through the channel. Once port officials get a 20- foot deep channel, Wade says the ships will come back. “But the problem is, we’re losing it (business) today, and Published by Daily Review 10/20/15