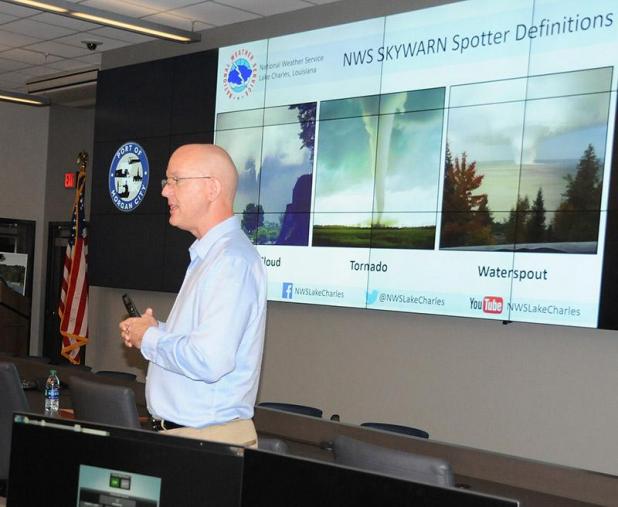 Roger Erickson, warning coordinator for the National Weather Service’s Lake Charles office, points to a screen Thursday during a hurricane season preparedness meeting at the Port of Morgan City’s Emergency Operations Center By ZACHARY FITZGERALD This email address is being protected from spambots. You need JavaScript enabled to view it.

Researchers at Colorado State University have projected the 2019 Atlantic hurricane season to see slightly below normal activity with 13 named storms, five hurricanes and two major hurricanes. The season starts June 1 and ends Nov. 30.But as forecasters and hurricane preparedness officials often say, it only takes one bad storm in a season to devastate communities. And the high water this year exacerbates that possible situation.Tim Osborn, navigation manager for NOAA’s Office of Coast Survey, said the Mississippi and Atchafalaya rivers this year have shattered the previous records for consecutive days above flood stage with about 140 straight days over that threshold.“We’ve had the wettest year in recorded history above us,” Osborn said.Therefore, high river conditions and backwater flooding are likely to re-main for a significant amount of time, which could worsen the potential effects of storm surge, Osborn said. “This high water season is no joke, and it is not going away. And we have no-where for water to go at this point,” said Coast Guard Cmdr. Heather Mattern, commanding officer of MSU Morgan City.Residents need to take the high water into consideration when determining what to do in the event of a storm this hurricane season, Mattern said.The region is currently in a weak El Niño, which typically means there’s stronger wind shear and usually indicates fewer than normal hurricanes will form in the Atlantic Ocean, said Roger Erickson, warning coordinator for the National Weather Service’s Lake Charles office.However, pockets of low wind shear still exist during overall strong wind shear, leading to possible formation of storms, he said. An El Niño weather pattern means that the water temperature in the Pacific Ocean near the equator is above normal, La Niña would indicate that the water temperature in the equatorial Pacific Ocean is below normal.Hurricane winds catch people’s attention, but the amount of rain that hurricanes can drop is usually the biggest issue, said Jimmy Broussard, liaison officer for St. Mary’s Office of Homeland Security and Emergency Preparedness.Officials have plans in place if a hurricane or other storm warrants evacuation of St. Mary Parish. Forty-eight hours before a storm is projected to make landfall, officials will evacuate hospitals, nursing homes, jails and people with special needs. Thirty-six hours prior to landfall, all residents south of the Intracoastal Waterway and people without transportation should evacuate. Parish officials will pick up those who don’t have transportation at designated locations and trans-port them to a shelter. If necessary, officials will take people to the pickup points, Broussard said. Morgan City Junior High School and Franklin High School are the two pickup points.Rapides Coliseum in Alexandria is the shelter to which St. Mary Parish residents without a place to go are taken. If St. Mary Parish leaders declare a mandatory evacuation, everyone else should leave the parish at least 24 hours before a storm is projected to hit. The parish issues tags for designated people to re-enter St. Mary after a major storm. Those tags are issued to people who have a priority to return, assess damage and begin rebuilding infrastructure, Broussard said. People can reach the St. Mary Parish Office of Homeland Security and Emergency Preparedness by calling 337-828-4100, ext. 135 or visiting its Facebook page. Published by Daily Review May 17, 2019