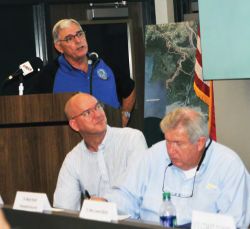 Forecasters are predicting above-average storm activity this hurricane season as the official start of the season approaches next week. And meteorologists are monitoring a disturbance already in the Caribbean. The Port of Morgan City hosted the annual Hurricane Preparedness Meeting Wednesday at its Emergency Operations Center. Hurricane season officially begins June 1 and continues through Nov. 30. Roger Erickson, warning coordination meteorologist for the National Weather Service’s Lake Charles office, spoke during the meeting. “We’re expecting this season to be more active than normal again,” Erickson said. Forecasters are expecting a distur- bance that’s in the Caribbean to develop into a “tropical system” this weekend or early next week in the Gulf of Mexico, Erickson said.

The projected path showed the system coming “basically straight up the Gulf” between the Yucatan Peninsula and Cuba, and then heading north toward the Mississippi-Alabama border, Erickson said. But the potential exists that the storm could drift further to the west and  affect Louisiana, he said. “It’s something that we’ll be monitoring as we go through the scenario through the upcoming weekend.” In a Thursday morning email, Erickson said the low pressure area near the southeastern section of the Yucatan Peninsula is slowly getting better organized. The National Hurricane Center has increased the chances for tropical development to 80 percent, with development expected this weekend in the southeastern Gulf of Mexico. Projections for landfall range from Louisiana to Florida early next week, he stated. Residents should be prepared each year for a potential storm regardless of how active the hurricane season may be, said David Naquin, incoming director of the St. Mary Parish Office of Homeland Security and Emergency Preparedness. “It only takes one,” Naquin said. Hurricane Andrew caused substantial damage to the region in August 1992. “That’s an A-named in August,” he said. “Last year they almost ran out the alphabet. So it doesn’t matter how many you have because it just takes that one to come floating through here. And it doesn’t have to be a Category 4.”

Naquin, a former sheriff, is taking over as homeland security and emergency preparedness director from Duval Arthur, who served in that position for over a decade. Arthur’s last day on the job is Friday. The Atlantic Basin experienced an above-average storm activity in 2008 when Hurricanes Gustav and Ike hit the region. That season occurred during the transition from La Niña to aneutral weather pattern, which is occurring in 2018, Erickson said. The Gulf of Mexico tends to see more than the average number of storms during this pattern, he said. In an average season, the Gulf sees 4.5 tropical storms with two hurricanes, one becoming a major hurricane of at least a Category 3. Naquin encouraged people to “have a game plan” to prepare for a potential storm to hit. He suggested people visit getagameplan.org to see ideas of how to plan. “You probably need to keep a two- or three-day supply of water and food you ... don’t have to cook,” Naquin said. Having a backup source of power, such as a generator, is also a good idea, he said. Storm surge and rain are the main reasons that officials call for evacuations ahead of certain storms. “There is no pump sys tem in the world that’s going to pump out a 50-inch rain,” Naquin said. In the event of an evacuation, Rapides Parish Coliseum in Alexandria is designated as the shelter for St. Mary Parish residents to go to if they need a place to stay. Officials use social media outlets to inform the public during emergencies, such as hurricanes. Re-entry passes are available for business owners and others who need to get back into the parish quickly after an evacuation occurs, Naquin said.