Congressman says dredging is job one 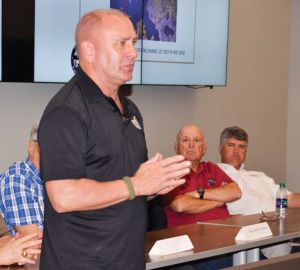 U.S. Rep. Clay Higgins’ No. 1 priority in Congress is to ensure south Louisiana’s ports get the dredging funds they were promised and can be economic engines for the region, he said Monday. Higgins, R-Lafayette, visited the Port of Morgan City’s Government Emergency Operations Center for a stakeholders meeting with officials in the area. Port Executive Director Raymond “Mac” Wade spent the day with Higgins showing him the Morgan City area and explaining the economic boost that having region’s waterways adequately dredged could provide. Higgins, who took office in January, said he’s studied the challenges associated with channel dredging “and the ridiculous failure of the federal government to live up to its mandate” and promise to south Louisiana. He represents Louisiana’s 3rd Congressional District, which covers areas from Morgan City to Lake Charles. Ports are extremely important to the communities they serve and the region’s potential for economic growth is intertwined with the health of each port, Higgins said. Companies in St. Mary Parish are losing work because vessels cannot get through the port’s waterways due to lack of depth, Wade said. Some area businesses aren’t able to take on jobs if those jobs require a vessel that has more than a 15-foot draft. Higgins referred to oilf i e l d c o m p a n y McDermott’s departure from Amelia several years ago that affected many workers in the area. “McDermott left because of a failure of the federal government,” Higgins said. Accumulation of fluid mud, also known as fluff, in the Atchafalaya River Bar Channel is the port’s biggest problem spot. Within just a few months of dredging, several feet of fluff builds back up. Officials’ goal is to keep the channel dredged to 20 feet deep and 400 feet wide year round. Port officials are exploring different options to find a dredging solution, including the possibility of getting a dredging company to build a customized piece of equipment the port could use to dredge more efficiently. Wade asked Higgins’ assistance to make sure the U.S. Army Corps of Engineers interprets language in the federal Water Infrastructure Improvements for the Nation Act favorably for the port to be able to handle its own dredging issues. The port gets dredging funds through the Corps of Engineers, but that funding has dropped from $18 million annually several years ago to $5.5 million this year. Port leaders are trying to find ways to get more funds and make more efficient use of those funds. The Corps had suggested the Port of Morgan City get $39 million for dredging and isn’t even close to the estimated $12 million that port leaders say they could make work, Higgins said. Higgins’ plan to get proper funds for dredging entails writing letters to federal policymakers “telling the story” of the economic impact, recommendation by the Corps, what needs to be done, what’s budgeted and how the expenses can increase federal revenues. Corps’ officials have used a cutter-head dredge to dredge the channel at a cost of $110,000 per day. Though effective, the cost is too high to be able to keep the channel properly dredged all the time. In the summer of 2016, the Port of Morgan City did a dredge demonstration using a hopper dredge at a cost of $45,000 per day. But that cost is still too high, Wade said. The ideal daily dredging cost would be about $10,000, which port leaders hope to reach. Higgins said his second priority is to push for the completion of I-49 South from Lafayette to New Orleans. The Morgan City Harbor and Terminal District Commission held its regular monthly meeting Monday. Corps Atchafalaya Region Manager Tim Connell said the Corps recently received bids to dredge the upper Bar Channel and lower Atchafalaya Bay, but officials didn’t have funds to even award the contract to the lowest bidder. However, Corps officials are trying to acquire additional funds and anticipate being able to award that bid to dredge the channel to 20 feet deep and 200 feet wide, Connell said. Connell also said during the port meeting that the Corps plans to hold a conference with members of the dredging industry within the next month to see if any companies are willing to create a solution to meet the port’s dredging needs.
Published by Daily Review 04/11/17