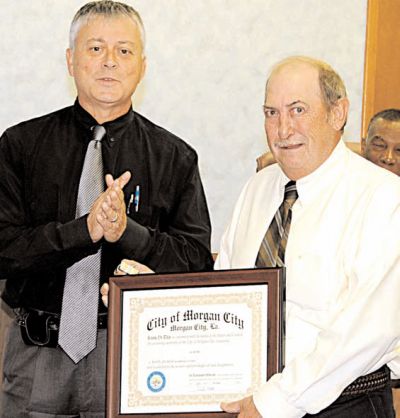 JOHN "AL"MISTROT, a construction representative with the U.S. Army Corps of Engineers’ New Orleans District, who will be retiring in December after about 37 years of service, was honored for his work in the local community during the Morgan City Harbor and Terminal District’s September meeting.  Mistrot, who has overseen dredge operations in the area for 76 dredgings of Berwick Bay since 1973, was honored by Morgan City Mayor Tim Matte with a key to the city and a framed certificate naming him an honorary citizen. Berwick Mayor Louis Ratcliff also presented Mistrot with a key to the Town of Berwick and a framed certificate.