Above, a November 2014 photo shows Planters Rice Mill of Abbeville exporting rice
from the Port of Morgan City for the first time. Trucks transported about 150 truckloads
of rice to the port in order to export 3,000 tons of rice by ship to Haiti.

Below, rice is shown as it is transferred from a truck to a barge. 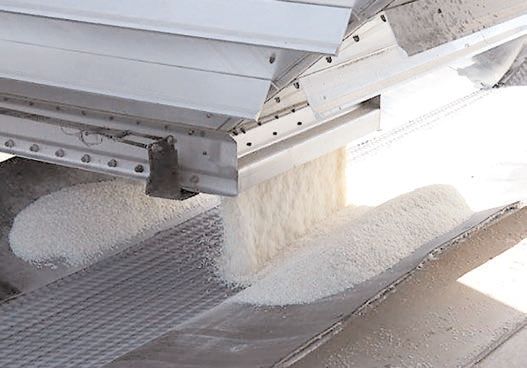 4,000 tons of rice on way to Haiti
BY ZACHARY FITZGERALD
This email address is being protected from spambots. You need JavaScript enabled to view it.

In the past eight months, import-export business has become a fairly common site at the Port of Morgan City with ships making stops at the port 18 times, and that business is continuing with about 4,000 tons of rice set to be exported to Haiti within the next couple of weeks. On Monday, barges arrived at the Port of Morgan City in anticipation of a rice ship coming to the port, Port Executive Director Raymond “Mac” Wade said. The ship will export roughly 4,000 tons of rice for Planters Rice Mill in Abbeville. In November 2014, Planters Rice exported 3,000 tons of rice from the port, the first time Planters used the Port of Morgan City for export. Import-export ships have made a total of 18 trips to the port since August 2014. The barges that came to the port will be used instead of a silo to store the rice until the ship arrives, Port Economic Development Manager Cindy Cutrera said. Rice will then be loaded onto the ship once it gets to the port. The ship will probably arrive at the port in early May, Cutrera said. About 190 truckloads of rice are scheduled to come in to the port compared to the 150 truckloads of rice exported in November 2014. In 2014, milled rice exports from Louisiana totaled $371 million, according to census.gov statistics. Louisiana exports of rice in the husk totaled $471 million, the statistics show. In 2013, milled rice exports were worth $417 million while exports of rice in the husk totaled $462 million, the report shows. In August 2014, the Oslo Bulk 9, a 360-foot-long, 60- foot-wide and 105-foot-tall ship leased by PMI Nutrition International, began importing sea salt and exporting grain out of the port. The ship traveled to Mexico and Haiti. PMI Nutrition International is owned by Land O’ Lakes. Planters Rice exported rice previously out of the port using the Oslo Bulk 9 but it may use a different ship this time, Wade said. Planters Rice officials had several ships they were looking to choose from in order to lease one to ship the rice, Wade said Wednesday. According to the results of an economic impact study that port consultants recently completed, each time a ship comes to the Port of Morgan City, it generates $300,000 in economic impact to the community, Wade said. Though port officials don’t yet have confirmation of any other import-export vessels coming to the Port of Morgan City, many other companies contacted the port showing an interest in doing business here, Cutrera said. With the increased import-export business, port officials hope that business gets the attention of government leaders who can help get proper funds to keep the Atchafalaya River Bar Channel dredged to its authorized dimensions, Cutrera said. The channel is congressionally mandated to be 20 feet deep and 400 feet wide. The bar channel is about 22 miles long and begins about 20 miles south of the Port of Morgan City dock.