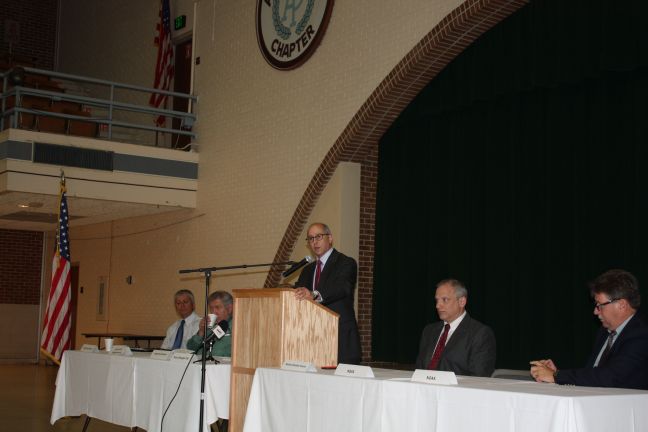 Though meteorologists are forecasting a below average year for hurricane activity in the Atlantic, one big storm can make a season. Forecasters expect seven
named storms, three hurricanes and one major hurricane of Category 3 or greater, said Andy Patrick, meteorologist in charge of the National Weather Service office in Lake Charles. Hurricane season starts June 1 and ends Nov. 30. Patrick was one of the speakers at Tuesday’s 2015 Hurricane Preparedness Public
Meeting at the Morgan City Municipal Auditorium. U.S. Rep. Charles Boustany, RLafayette, partnered with the National Weather Service, National Atmospheric and Oceanic Administration, and Port of Morgan City to host the meeting. “Our maritime sector and our coastal life is vital for all of us,” Boustany said. “It’s part of our culture. It’s ingrained in us, and our safety has to be first and foremost.” Tuesday’s forum also served as a time for officials to reflect on the upcoming 10-year  anniversary of  Hurricanes Katrina and Rita. Since that time, hurricane forecasting and tracking, and impact and intensity assessments have greatly improved, Patrick said. People should keep in mind that hurricanes, such as Hurricane Audrey in 1957, Hurricane Betsy in 1965, and Hurricane Andrew in 1992 occurred in El Niño climates, he said. El Niño normally suppresses tropical storm development in the Atlantic Ocean but brings a more abundant hurricane season to the Pacific Ocean, he said.

Tim Osborn of the National Oceanic and Atmospheric Administration said the category of a storm has nothing to do with the flood event the storm can cause. The amount of activity during a season is also not an indicator as whether a destructive storm will hit.  In 1992, there were onlythree named storms, but that same year Hurricane Andrew  did major damage to almost every structure in St. Mary Parish, Osborn said. St. Mary Levee District Executive Director Tim Matte said the district was formed as a response to the devastation  caused by Hurricanes Katrina and Rita. Parish leaders decided that having one entity responsible for levees throughout the parish would be a good idea  So, in 2007, the Legislature created the St. Mary Levee District,Matte said. St. Mary Parish Emergency Preparedness Director Duval Arthur identified major lessons learned as a result of Hurricanes Katrina and Rita. Issues with saltwater intrusion, flooding,
communications, limited gasoline and traffic were among those lessons, he said. The four main hazards associated with tropical storms and hurricanes are flooding, wind, storm surge and tornadoes, Patrick said. People should know the flood threat to their homes and businesses. Additionally, they should learn the elevation of
their property, and potential storm surge impact, Patrick said. The 2015 hurricane season marks the first time the National Hurricane Center will begin issuing storm surge warnings, he said. An accurate storm surge threat assessment is vital for the region, Patrick said. Concerning wind threats, gusts are potentially more destructive  than sustained winds  as gusts can be up to 50 percent greater than the sustained winds, Patrick said.Tropical storm force winds of50 to 60 mph winds can cause power outages lasting one totwo weeks, he said.Tornado threats from hurricanescome in two forms, onefrom the eye wall of a hurricane and the other from the outer rain bands far away from the storm, Patrick said. The biggest rainmakers have been tropical storms or tropical depressions not hurricanes, Patrick said.