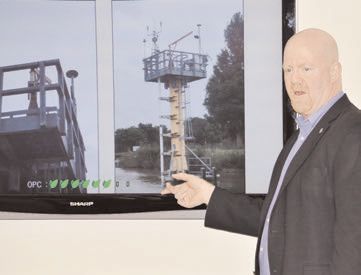 As of Monday, mariners now have access to more real-time weather and waterway information in the Atchafalaya River to assist them in their navigation efforts and decision making. Two Physical Oceanographic Real-Time System stations, which were recently installed near the Eugene Island Lighthouse and about two miles south of Eugene Island in the Atchafalaya River Bar Channel, became operational Monday, according to officials. The Morgan City Harbor and Terminal District Commission met Monday at the Port of Morgan City. The stations were paid for by $550,000 in 2011 port security grant funding. Eugene Island Lighthouse is about 25 miles south of the Port of Morgan City. The system consists of four stations including the two newly-installed and two more stations in Berwick and Amerada Pass, Darren Wright, PORTS program manager for the National Oceanic and Atmospheric Administration said. The two older stations have been in place for six years and two years,respectively. Amerada Pass is located four to five miles north of Eugene Island. “Now we’ve got coverage all the way for our entire channel,” Port of Morgan City Executive Director Raymond “Mac” Wade said. The systems are a network of oceanographic and geological sensors located near ports to provide mariners with information to help them navigate  safely and efficiently, Wright said. The information the systems provide includes observed and predicted water levels, river current, wind speed and direction, barometric pressure, and air and water temperature, Wright said. NOAA partnered with the Port of Morgan City, which acted as the project sponsor, to install the systems. NOAA provides the program management, data collection, infrastructure dissemination and the quality control on a 24/7 basis, Wright said. The Port of Morgan City’s real-time system is the 24th such system implemented around the country, Wright said. NOAA officials studied the impact of the systems’ economic benefits, which showed a 59 percent reduction in vessel groundings and 21 percent reduction in oil spills just by knowing the up-to-date info, Wright said. Data from the real-time systems can be accessed by visiting tidesandcurrents.noaa.gov/port s/index.html? ort=mc. The mobile link is mobile.tidesandcurrents. noaa.gov/ports/mobile.sht ml?port=mc. People can also call 888-312-4113 to access the data.