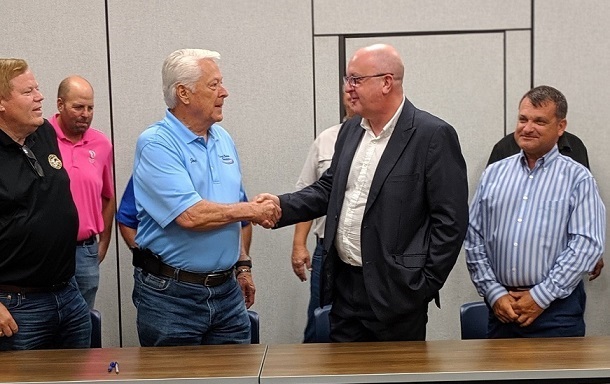 InterMoor is pleased to announce they have renewed the lease at their fabrication facility in Morgan City, Louisiana.

Originally inaugurated in 2011, the 24-acre facility was subsequently expanded to 34 acres. Since its inception eight years ago, the purpose-built facility has successfully completed hundreds of fabrication projects, including over a hundred steel piles installed offshore for the largest oil and gas projects in the Gulf of Mexico and abroad.

Amenities include more than 30,000-sq-ft of fabrication space; mooring equipment storage capabilities; a 12,000-sq-ft multi-purpose building for administrative and operations employees; dock side loadout areas; and a state-of-the-art 20,000-sq-ft blasting and painting facility. Equipment includes extensive crane capability and a DAVI model 3060, four-roll, fully-hydraulic plate rolling machine, which can roll up to 2 ¾” thick mild steel and accommodate plate widths of up to 10‐ft., allowing production ranges from 9 ft. OD up to 20 ft. OD.

Recently added competencies include sub-arc welding and pressure-rated piping for the fabrication of PLETs and jumpers.

Martin Kobiela, President, InterMoor Inc., says “We are thrilled to continue our relationship with the Morgan City Port Authority. The renewal of this lease for five more years, plus 5 additional 5-year options, is a testament to how strategically important InterMoor views this fabrication facility, as a crucial part of their global life-cycle mooring solution that includes design, fabrication, installation, and up to decommissioning. Our facility is proud to contribute to the local economy with 100 full time positions and many contract jobs. For our clients, it has continuously demonstrated its excellence in fabrication and, of course, convenience since it allows easy access to all major US ports and offshore areas.”

Raymond “Mac” Wade, Executive Director, Morgan City Harbor and Terminal District, says “This is a big day for the Port of Morgan City and InterMoor.  It shows a commitment to their employees and the community that InterMoor is here for the long run.  We are grateful InterMoor has chosen Morgan City as their base of operation in Louisiana.”

Tuesday marked an important milestone in the U.S. Coast Guard’s more than half-a-century presence in Morgan City. Officials with the Port of Morgan City and Coast Guard’s Marine Safety Unit Morgan City held a ribbon-cutting ceremony to announce the unit as a new tenant of the port’s Government Emergency Operations Center.  The Morgan City Coast Guard unit moved its offices to the port center on La. 182 from its prior location on David Drive. Cmdr. Heather Mattern, commanding officer of MSU Morgan City, thanked everyone involved in the move for their efforts.  “We have overcome 10 years worth of bureaucracy and obstacles,” Rear Adm. Paul Thomas said of Tuesday’s ribbon cutting.  Thomas is commander of the 8th Coast Guard District but will be leaving that post in two weeks to serve at Coast Guard headquarters in Washington, D.C. The 8th district is headquartered in New Orleans and spans 26 states.  “This is just one more milestone in the long and rich history of the Coast Guard here in Morgan City,” Thomas said. “We are here in Morgan City for important reasons, and we are here to stay.”  MSU Morgan City now has the opportunity to maximize space and use innovative technology in a state-of-the-art facility to work with other agencies to protect the community and nation, Port Executive Director Raymond “Mac” Wade said.The Morgan City area has embraced Coast Guard members, and that by itself is reason enough to keep a presence in the community. The Category 5 hurricane-rated Emergency Operations Center with more than 12,000 square feet is what the Coast Guard personnel deserve, Thomas said.Coast Guard leaders approached Port of Morgan City officials about a decade ago re-questing that the port construct an updated building that could meet the government standards, Wade said.Port officials were able to secure land on which to build the center from the city and private landowners. The multi-year process leading up to Tuesday’s ribbon cutting was “very tedious,” but the port and Coast Guard never gave up, Wade said.State Rep. Sam Jones, D-Franklin, and Sen. Bret Allain, R-Franklin, played a big role in securing the $9 million in state capital outlay funds to build the center that opened in 2016, Thomas and Wade said. Thomas also expressed appreciation to Wade, who has “more sweat equity” put into the facility than anyone else.The Vessel Traffic Service is in the process of completing the move to the new facility. For the first time, the Coast Guard will have a home in Morgan City that meets all of the federal standards, Thomas said.The Coast Guard established its marine inspections detachment in Morgan City in 1968. And the Vessel Traffic Service Berwick Bay was made permanent in 1975. During 1987, the Coast Guard formed the Morgan City marine safety office and captain of the port. In 2017, the Coast Guard moved the captain of the port designation to Houma, though a strong Coast Guard presence remains in Morgan City, Thomas said.